In a large, unselected population of ambulatory cancer patients, the Khorana score was able to risk-stratify patients according to the 6-month risk of incident venous thromboembolism (VTE) but was unable to do so for patients with certain cancer subtypes, according to research published in Blood Advances.

“The Khorana score is recommended for guiding primary [VTE] prophylaxis in cancer patients, but its clinical utility overall and across cancer types remains debatable,” the researchers wrote in their report. “Also, some previous validation studies have ignored the competing risk of death, hereby potentially overestimating VTE risk.”

The researchers conducted a registry-based cohort study of ambulatory patients with cancer initiating chemotherapy to assess the clinical potential of using the Khorana score for risk stratification. They also quantified the impact of ignoring competing risk of death when estimating absolute risk.

The team identified patients without other indications for anticoagulation using Danish health registries and estimated 6-month cumulative incidence of VTE stratified by Khorana classification. Using Kaplan-Meier analyses, they conducted the analyses with and without considering death as a competing risk and for cancer overall and stratified by cancer types.

Among patients recommended anticoagulation based on a Khorana score ≥2, the team estimated that the 6-month risk of VTE was 3.6% (95% CI, 3.3-3.9). They found that the estimated cumulative incidence using Kaplan-Meier analysis resulted in a relative overestimation compared with that estimated using the competing risk model, both overall and for cancer types, with the highest overestimation at 23%. They also found that the guideline-recommended threshold of a Khorana score ≥2 did not risk-stratify patients with hepatobiliary or pancreatic cancer, lung cancer, and gynecologic cancer.

“In conclusion, the Khorana score was able to stratify ambulatory cancer patients according to the risk of VTE, but not for all cancer types. Absolute risks varied by methodology but were lower than in key randomized trials. Thus, “the absolute benefit of implementing routine primary thromboprophylaxis in an unselected cancer population may be smaller than seen in randomized trials,” the authors concluded.

The primary limitations of the study included those inherent to studies using administrative registries, such as potential coding errors and unavailable or missing data, and the inability to describe bleeding risk because primary thromboprophylaxis

in ambulatory patients is not routinely used in Denmark. 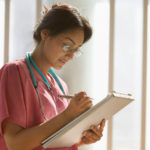