Patients with steroid-refractory immune thrombocytopenic purpura (ITP) may not have significantly different responses to rituximab or splenectomy as second-line therapy, according to a study published in The International Journal of Hematology.

ITP is a common hematologic disease whose hallmark characteristic is thrombocytopenia, and is primarily treated with corticosteroids. Previous studies have demonstrated that in patients who are refractory to primary treatment, splenectomy or rituximab have been effective as second-line therapies.

In this retrospective single-center study, researchers evaluated the outcomes of 143 patients with ITP who had no response to or were unable to wean off of corticosteroid therapy, 19 of whom received intravenous rituximab 375 mg/m2 for 4 weeks and 11 who underwent splenectomy. Platelet levels at diagnosis were not significantly different between the study arms (P =.062), and patients in the splenectomy arm were younger (P =.011). Response to treatment was measured every 3 months.

There was no significant difference between the rates of no response compared with complete response in patients receiving rituximab or splenectomy as second line therapy (odds ratio [OR], 2.03; 95% CI, 0.21-22.90; P =.549).

No statistically significant differences in platelet counts were observed between the 2 study groups over time (P =.101).

The authors of the study concluded that even though the response rate did not differ significantly between rituximab and splenectomy, “further large studies are needed to assess the response rate directly comparing the two treatment modalities as second-line therapy.” 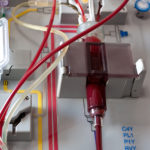