After adjusting for time-varying covariates, preeclampsia may be an independent risk factor for later-life stroke in women who have had 1 or more pregnancies, according to results from the secondary analysis of the Framingham Heart Study published in JAMA Network Open.

A team of investigators conducted a population-based cohort study to determine whether a history of preeclampsia affected the relative risk for incident stroke after factoring in time-varying covariates. They did so by using marginal structural models.

Study investigators included women with 1 or more pregnancies who were stroke free at the time of enrollment, had a minimum of 3 study visits, and at least 1 pregnancy prior to menopause, hysterectomy, or age 45 years in the analysis. The main study outcome was the incidence of stroke later in life.

The marginal structural model provided a link between preeclampsia and stroke only when adjustments were made for all vascular risk factors throughout the course of life. Following this adjustment, women with a history of preeclampsia had a relative risk of 3.79 for later-life stroke compared with women without such history.

“Future research is warranted to fully explore the mediation of this association by midlife vascular risk factors,” the study investigators concluded.

Disclosure: Multiple authors declared affiliations with the pharmaceutical industry. Please refer to the original article for a full list of disclosures. 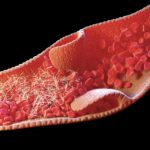 Diagnosis and Management of Coagulation Disorders Related to COVID-19