Myeloproliferative neoplasms (MPNs) are a group of clonal myeloid cell-derived disorders and a common hematologic malignancy seen in the elderly. Three entities comprise the classical Philadelphia chromosome-negative MPNs: polycythemia vera (PV), essential thrombocythemia (ET), and primary myelofibrosis (PMF). While 5-year relative survival varies according to type (84.8%, 89.9%, and 39% for patients with PV, ET and PMF, respectively), progression to post-ET/PV myelofibrosis and subsequently to acute myeloid leukemia (AML) dramatically reduces the median survival.1 Another common complication is thrombosis in the micro- and macrocirculation, which contributes significantly to morbidity and mortality in patients with MPNs.

Overall, venous thromboembolism (VTE) is a highly prevalent complication seen in patients with cancer. Studies have suggested that different risk factors may play a role, and risk models have been developed to identify patients with MPNs who may be at a higher risk for thrombosis. However, the pathogenesis of MPNs and reasons for the increased thrombotic tendency found in patients with MPNs remain unclear. In a paper published in the Journal of Thrombosis and Thrombolysis, Somedeb Ball, MD, of the department of internal medicine at the Texas Tech University Health Sciences Center in Lubbock, and colleagues presented an overview of thrombosis in MPNs, including its epidemiology and risk factors, as well as the pathophysiological mechanisms that may be contributing to thrombogenesis in patients with MPNs.

“The pathophysiology remains unclear,” said Dr Ball, noting the various potential mechanisms and risk factors outlined in the paper. “Looking at those, one might argue that it is actually multifactorial.”

In MPNs, the prevalence of thrombotic events ranges from 10% to 29% in ET and 34% to 39% in PV patients, while the adjusted rate of thrombotic events is 2.2% per patient year in those with PMF. Data from the European Collaboration on Low-dose Aspirin in Polycythemia Vera (ECLAP) study showed that thrombosis was an important cause of cardiovascular mortality in patients with PV, accounting for 41% of all deaths.2

Several pathophysiological mechanisms have been proposed to help explain the increased likelihood of thrombosis in MPNs, although it is still not well understood.  Previously, the underlying cause was believed to be hyperviscosity due to high cell counts, but newer concepts of microparticles, leukocyte activation, and mutation-driven pathways are replacing that hypothesis.

General risk factors for thrombosis in MPNs have been identified, including age, previous history of thrombosis, hereditary thrombophilia, and smoking. However, disease-associated factors like JAK2 V617F mutation and leukocytosis also appear to have a significant role in the process. Findings from several systematic reviews and meta-analyses have conclusively shown that harboring the JAK2 mutation is associated with a higher risk of venous and arterial thrombosis in patients with MPNs compared with those who don’t have the mutation. The authors pointed to a retrospective study in patients with ET showing that the JAK2 V617F mutation increased the relative risk of thrombosis in patients by 45%. Additionally, in older patients with PMF, the highest incidence of thrombosis occurred in patients who had the mutation as well as leukocytosis (3.9% per patient year; hazard ratio [HR] 3.13, 95% CI 1.26-7.81).3,4

Research also suggests that harboring the JAK2 allele correlates positively with the risk of thrombosis in patients with MPNs. One study cited by Dr Ball and colleagues found that patients who were homozygous for JAK2 mutation had an “exceedingly high risk” of total thrombosis (HR 3.97, 95% CI 1.34-11.7) even after adjusting for confounders. 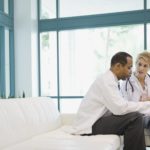 Controversy Continues Over Relationship Between VTE and Testosterone Therapy