Thrombocytopenia in neonatal sepsis was shown to be associated with maternal hypertension, intravascular thrombosis, and Gram-negative sepsis, according to the results of a recent study published in PLoS One.

In multivariate analysis, the following were independently associated with thrombocytopenia in neonates: maternal hypertension (OR 1.76; P =.021), intravascular thrombosis (OR 4.98; P =.005), and Gram-negative sepsis (OR compared with Gram-positive 2.74; P =.003).

In an interview with Infectious Disease Advisor, Isabelle Ree, PhD candidate at Leiden University Medical Center in The Netherlands and lead study investigator, explained that the results of the study “shed a broader light on the complex relationship between thrombocytopenia and sepsis.” She concluded that “it is unclear whether thrombocytopenia in sepsis is merely a marker of sepsis severity, but the occurrence of thrombocytopenia in sepsis is clearly associated with mortality and should therefore be considered as an alarming and serious condition.” 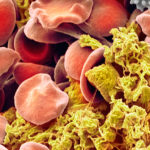