Researchers developed a model to assess the risk of deep vein thrombosis (DVT) in patients treated for liver failure using an artificial liver support system (ALSS). Results of their analysis were reported in the World Journal of Clinical Cases.

The researchers explained in their report that ALSS is effective at treating liver failure, but with a requirement for deep venous intubation and indwelling catheterization over a substantial period.

The researchers developed and analyzed the risk assessment tool in 3 phases. In the initial phase, they obtained clinical data from patients regarding clinical and treatment parameters, and they identified DVT risk factors through logistic regression analyses. In the second phase, the researchers devised a DVT risk assessment score based on results of the regression analyses, and in the third phase they validated the scoring system.

The validation portion of the study included data from 213 patients treated with ALSS for liver failure, of whom 14 had DVT in lower limbs. The model was found to have a specificity of 88.9% and a sensitivity of 85.7% for assessing risk of DVT when a score of 3 was used as a threshold in an analysis of the area under the receiver operating characteristic curve.

The study investigators concluded that that the model they developed was a simple risk assessment method that provided both good sensitivity and specificity. Since this was a single-center, retrospective analysis, they recommended further research to validate the results. 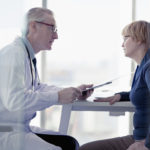