Cyclic thrombocytopenia (CTP) is a rare disease characterized by periods of fluctuating platelet counts dipping as low as less than 5 × 109/L with a subsequent rapid increase to normal levels or rebound thrombocytosis. The duration of these cycles typically ranges from 14 to 36 days and may be suggestive of underlying etiologies. The prevalence of CTP is greater in adults compared with children and most commonly occurs in women compared with men.1

The diagnosis and treatment of CTP can be challenging. “The biggest challenge is in considering the diagnosis, as CTP is very rare and is frequently mistaken for immune thrombocytopenia (ITP),” noted Caroline Cromwell, MD, assistant professor of medicine in the division of hematology and medical oncology at the Icahn School of Medicine at Mount Sinai in New York, in an email interview. Patients may not receive a correct diagnosis until years later when treatment with ITP-specific therapies fails to produce a response.1

Paul Kyrle, MD, and Sabine Eichinger, MD, of the Karl Landsteiner Institute of Thrombosis Research in Vienna, Austria, aimed to raise awareness of CTP and to offer guidance regarding early diagnosis and management of adults with the disease in a paper published in Blood.1 Of the details described in their paper, key points are summarized below.

The pathogenesis of CTP has not yet been elucidated, and its presentation as reported has been heterogeneous. Features may include “accelerated platelet destruction, bone marrow abnormalities, T-cell receptor rearrangement, impaired regulatory mechanisms of platelet production, a connection with other disorders, and synchrony with the menstrual cycle,” based on observations by the review authors and other investigators.1 While it is “unknown whether these conditions are causative, transient, reactive, a byproduct of so far undiscovered pathomechanisms, or coincidental,” they may represent important clues in identifying CTP.

Many patients with CTP exhibit the presence of antiplatelet antibodies, with an inverse relationship to the platelet count. Dr Kyrle and Dr Eichinger, along with other researchers, have observed an inverse correlation between platelet counts and thrombopoietin (TPO) levels in individuals with CTP, indicating abnormal regulation of platelet production. In one such case, Zhang et al “identified a heterozygous MPL c.1210G>A mutation, which lead to a p.Gly404Arg substitution,” as noted in the review.1,2 “The mutant failed to support TPO-stimulated growth of Ba/F3 cells that express wild-type MPL and otherwise exhibit Il-3 independent growth in response to TPO.”

Various case studies have reported abnormal megakaryocytopoiesis in CTP, including a patient who showed cyclic disappearance of mature and immature megakaryocytes and subsequently died from intracranial bleeding after developing permanent amegakaryocytosis.

CTP may be synchronized with the menstrual cycle, with the zenith usually observed mid-cycle. In one woman with menstrual cycle-synchronized CTP, Dr Kyrle and Dr Eichinger found a T-cell receptor rearrangement and antiplatelet antibodies on laboratory testing, and hypothyroidism was detected.3

CTP commonly co-occurs with other disorders. For example, in an observational study published in Haematologica by Dr Kyrle, Dr Eichinger, and colleagues, all of the female patients (8 of the 9 participants) had a concomitant thyroid disorder.3 Although the mechanisms driving this association are unclear, the authors do not believe it is a chance finding. Notably, there is also a close link between autoimmune thyroid diseases and ITP. Other disorders observed in patients with CTP include but are not limited to polycythemia vera, acute myeloid leukemia, and primary cyclic immune neutropenia.1 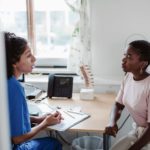