In a long-term analysis, researchers evaluated mortality rates among patients with beta-thalassemia and pulmonary arterial hypertension (PAH) who had right heart catheterization. Results of this analysis were recently reported in the journal Blood.

In the original study, based on calculations of systolic pulmonary artery pressure (sPAP), patients had been grouped by probability of having pulmonary hypertension, and most with likely pulmonary hypertension underwent right heart catheterization. PAH was confirmed in 27 patients, 24 of whom were included in the follow-up analysis. In this follow-up analysis, mortality outcomes and multiple patient demographic and clinical data were evaluated.

“Although this study was not designed to evaluate the impact of therapy on PAH-related mortality, improvement in sPAP with the use of pharmacologic agents was associated with a lower mortality rate, especially for patients achieving >25% reduction from baseline,” the study investigators wrote in their report. They indicated more research is needed to evaluate survival trends with PAH-targeted treatment. 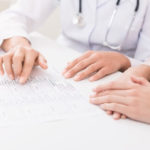