In patients with multiple myeloma (MM), researchers identified a connection between loss of the 2q37 chromosomal region and resistance to immunomodulatory drugs (IMiDs). They recently reported these and other study findings in a report in the journal Blood.

MM can be associated with a variety of genetic changes, such as variations in gene sequence and copy number aberrations (CNAs). Past research by the study investigators revealed changes related to the CRBN gene, encoding cereblon, associated with IMiD resistance.

In the current analysis, the researchers were evaluating whether they could identify other genomic relationships to IMiD resistance, using a whole-genome sequencing approach. They did so in patients with newly diagnosed MM and patients after becoming refractory to lenalidomide (LEN) and lenalidomide-then-pomalidomide (LEN-then-POM).

Patient cohorts included 198 newly diagnosed patients, 269 LEN-refractory patients, and 55 LEN-then-POM-refractory patients from MM clinical trials and 50 patients from UK biobanks. The researchers identified 3 genomic regions enriched in genes that appeared relevant to refractory states. These were 3p, 17p, and 2q37 regions. The 3p region contains the CRBN locus, and the 17p region contains the TP53 gene, in addition to 3 other genes possibly related to IMiD response.

The 2q37 region had not been previously recognized as relevant in MM. This region contains COPS7B and COPS8 genes, which the authors reported as being related to CRBN stability. Frequencies of losses of either of these genes appeared to increase in patient cohorts with increasing states of refractoriness to IMiD treatments.

The researchers also investigated available outcomes data from the STRATUS trial for LEN-refractory patients (188 patients) who were subsequently treated with POM. Among a total of 7 patients who had 2q37 loss with a cancer clonal fraction >0.75, there was a nonsignificant trend toward lower progression-free survival (P =.09), although this analysis was limited by the small sample size.

“We demonstrated the contribution of CRBN copy loss in LEN/POM-refractory patients, and now identify a second therapy-related CNA, 2q37 loss, whose incidence increases through LEN- and POM-refractory states, emerging as a marker of dominant clones in IMiD-resistant disease,” the study investigators wrote in their report. 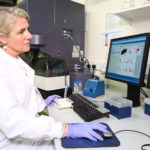