Chemomobilization for autologous stem cell transplantation (autoSCT) in patients with multiple myeloma (MM) using a combination of intermediate-dose cytarabine (ID-AraC) and granulocyte colony-stimulating factor (G-CSF) may be more effective than G-CSF monotherapy, according to a study published in Biology of Blood and Marrow Transplantation.

AutoSCT is the foremost therapy for patients with MM, and peripheral blood is used as the graft source in 99% of cases. To ensure that an adequate number of stem cells (defined as 2 x 106 CD34+ cells/kg) are harvested, a chemomobilization strategy consisting of G-CSF therapy with chemotherapy may be employed. Previous studies have demonstrated high efficacy of ID-AraC and G-CSF as a mobilization regimen and better efficiency of ID-AraC as a chemotherapeutic agent compared with cyclophosphamide.

In this randomized, open-label, phase 3 trial, 90 patients with MM who underwent tandem autoSCT were randomly assigned to receive either ID-AraC plus G-CSF (44 patients) or G-CSF monotherapy (46 patients). Patients who were mobilized with G-CSF received 5 µg G-CSF/kg twice daily, subcutaneously, for up to 7 days. Patients who underwent chemomobilization with ID-AraC plus G-CSF received 0.4 g ID-AraC/m2 twice daily, intravenously, for 2 days and 5 µg G-CSF/kg twice daily, subcutaneously, after day 5.

If peripheral blood CD34+ level reached 10 cells/µL, apheresis was initiated and continued daily for up to 3 days or until at least 5 x 106 CD34+ cells/kg were collected. The primary endpoint was the proportion of patients who collected 5 x 106 CD34+ cells/kg; number of days of apheresis, total number of harvested cells, peak CD34+ level, and hematologic and nonhematologic complications were also measured.

The authors noted that chemomobilization may lead to greater toxicity, particularly myelotoxicity, and cited the need for platelet transfusion in 34% of patients as a major disadvantage of treating patients with ID-AraC. However, they concluded that ID-AraC demonstrated significantly higher efficacy than G-CSF alone as a chemomobilization agent, suggesting that “the use of ID-AraC should be preferred among chemomobilization protocols for patients with MM.” 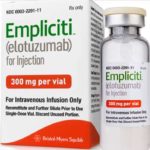