Researchers at the Ningbo First Hospital, in Ningbo, China, evaluated the prognostic value of inflammatory indices, including neutrophil-to-lymphocyte ratio (NLR), PLR, and CRP, in patients who were newly diagnosed with MDS.

They also found that patients with higher CRP levels had shorter leukemia-free survival (LFS; P =.041) but that higher PLR and NLR were not significantly associated with LFS (P >.05 for both).

“[T]he results of this study suggested that PLR and CRP were independent prognostic indicators for OS in MDS,” the researchers wrote in their report. “Considering the cost-effectiveness and feasibility, these markers will be applicable for a large number of patients with MDS in the near future and further be integrated into customized treatment decision-making for MDS patients.”

Limitations of the study included the retrospective design, a relatively small sample size, limited information on patients’ comorbidities, lack of measurement of other inflammatory indicators, and limited information in the cohort for gene mutations linked to MDS prognosis. 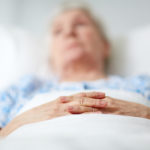