Among fit older adults with advanced myelodysplastic syndromes (MDS) undergoing hematopoietic stem cell transplantation (HSCT), survival is significantly improved when transplantation is performed early or for adverse risk disease but not for patients with standard risk disease with severe cytopenia, according to study results published in Leukemia.

For patients with MDS, the median age at the time of diagnosis is approximately 70 years, and patients typically have an overall survival of 1 year in advanced disease. Although the only known curative therapy is HSCT, the study authors noted that “The median age at diagnosis has historically limited the number of patients considered eligible for [HSCT].” This is because of the increased mortality linked to myeloablative conditioning regimens in this patient population. However, reduced-intensity conditioning (RIC) has allowed HSCT to be a treatment option for fit, elderly patients.

Gregory A. Abel, MD, MPH, of Dana-Farber Cancer Institute and Harvard School of Public Health, in Boston, Massachusetts, and associates conducted a prospective observational study to assess survival among patients aged 60 to 75 years with advanced MDS who were eligible for HSCT, and to compare RIC HSCT vs non-HSCT approaches in this patient population. The primary endpoint was overall survival.

In a multivariable analysis controlling for several factors, the HR for mortality among patients who underwent HSCT vs no HSCT was 0.75 (P =.13), and the HRs for adverse MDS risk and standard risk with severe cytopenia were 0.57 (P =.01) and 1.33 (P =.36), respectively.

“[F]it adults with advanced MDS, a treatment strategy that included [HSCT] trended toward better overall survival,” the investigators noted. “There were also significant benefits for those receiving [HSCT] within 5 months and for those with adverse disease risk factors as compared to standard risk with severe cytopenias. Future studies should refine which subgroups of adverse risk patients benefit most, how genomics and measurable residual disease can be used to risk stratify consideration of [HSCT] in this patient population, and how recently characterized predictors, such as frailty, may be incorporated into these decisions,” the authors concluded. 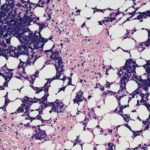