Following up on these studies, Dr McKinney and colleagues leveraged next-generation sequencing to map the genetic basis of HSTCL. Through whole exome sequencing of 68 HSTCLs, the team identified numerous novel and recurrent mutations and copy number variants associated with the disease.

“A lot [about the genetic basis of HSTCL] was still unknown before our study,” said Dr McKinney. “We were able to identify previously known abnormalities, such as isochromosome 7, and the most commonly mutated genes to further home in on what drives HSTCL.”

Among the most commonly mutated genes were chromatin modifying genes, including SETD2 (71%), INO80 (21%), and ARID1B (19%). Other frequent mutations in HSTCL were in STAT5B (31%), STAT3 (9%), and PIK3CD (9%); these are of special interest because potential therapies targeting these genes in other disorders already exist. Furthermore, when compared to other T and B cell lymphoma types, HSTCL appears to have a unique profile of genetic mutations; mutations in SETD2, INO80, TET3 and STAT5B occurred almost exclusively in HSTCL.

“[There’re] a lot of opportunities here in terms of targeted therapies. In HSTCL and other peripheral T-cell lymphomas, targeting the JAK/STAT and PI3K pathways and using available small molecule inhibitors, either in combination with chemotherapy strategies or novel therapies, is very applicable. Some of those agents are already being studied in other T-cell lymphomas,” Dr McKinney stated.

Though data from retrospective studies and case reports are limited and with possible biases, according Dr Pro and colleagues, the best therapeutic approach appears to be a non-CHOP induction therapy followed by consolidation with allogeneic transplant or autologous transplant if a suitable donor is not available.

“Our standard approach is to use HyperCVAD or HyperCVAD-like regimens, and we immediately refer our patients for consideration of high-dose therapy with stem cell support. Alternatively, platinum-, ifosfamide- , or different cytarabine-containing regimens can be used, as they have also been associated with superior results,” wrote the authors.

However, the aggressive clinical course of HSTCL still limits the use of stem cell transplantation, and in many cases, transplant has been associated with high rates of morbidity and mortality. A non-relapse mortality rate of up to 68% has been reported.

“Unfortunately, a number of patients just don’t get a good enough response to be able to clear enough of their lymphoma and to be healthy enough to go through a transplant with the induction programs for HSTCL,” noted Dr McKinney. “We need to figure out what the best induction programs are, where some of these novel targeted agents can fit in, and whether multiplexed assays for genomic alterations can help guide therapy.”

The rarity of HSTCL necessitates community awareness of the disease and comprehensive multinational studies to verify the benefits of current and potential novel therapeutic approaches. 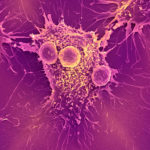