A research team developed a machine learning-based model for predicting response to therapy in patients with diffuse large B-cell lymphoma (DLBCL). Details of this model were reported in Blood Cancer Journal.

As the researchers explained in their report, DLBCL is a common form of lymphoma, but it is marked by heterogeneity in its course and outcomes, in addition to the variety of subtypes of DLBCL. The research team developed a model based on machine learning to serve as an aid to predicting survival outcomes in patients with DLBCL in order to predict which patients may not respond to treatment with rituximab, cyclophosphamide, doxorubicin, vincristine, and prednisone (R-CHOP) therapy, so that patients who may benefit from a different approach may be identified.

The prognostic model was developed based on transcriptomic data from 379 patients with de novo DLBCL and 247 patients with extranodal DLBCL. Patients had been treated with R-CHOP therapy. RNA analysis of samples obtained from patients was based on a panel of 1408 cancer-associated genes. Data from the patients with de novo DLBCL were used in constructing the model, while data from the patients with extranodal DLBCL were used for validating the model. First, the model assigned patients into subgroups based on overall survival with R-CHOP therapy. Then the model was used to determine the prognostic utility of potential biomarkers found in transcriptomic analysis.

Using the model based only on survival data and without consideration of genetic markers, patients were first placed into short versus long survival groups, and this categorization showed a hazard ratio (HR) for survival of 0.237 (95% CI, 0.170-0.330; P <.00001). However, heterogeneity in survival was still seen in these groups, so patients were further stratified according to patterns of longer and shorter survival within these groups, which results in a total of 4 subgroups. This model with 4 subgroups showed an HR for survival of 0.174 (95% CI, 0.120-0.251; P <.0001).

In incorporating transcriptomic data into the model, the researchers used a naïve Bayesian classifier to rank the 1408 analyzed biomarkers for prediction of each survival subgroup. They ultimately chose 180 genes to use as biomarkers in the final model. Patterns of overall and progression-free survival for subgroups developed with this model reportedly were similar to results seen for the 4 subgroups developed using survival data alone. For predicting overall survival, this model had an HR of 0.530 (95% CI, 0.234-1.197; P =.005) when 4 survival subgroups were used.

“This subclassification of DLBCL can be automated through simple software that we developed and can predict the survival subgroup when fed with RNA sequencing data,” the researchers concluded in their report. 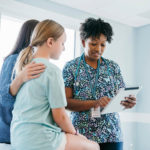