A recent study published in Blood confirmed the importance of radiotherapy (RT) among pediatric patients with early‐stage low-risk classical Hodgkin lymphoma (cHL) who had a positive interim PET response after 1 cycle (PET1) of AVPC (doxorubicin, vincristine, prednisone, and cyclophosphamide) chemotherapy. The sites of relapse among these patients suggests the need to further optimize therapy with alternative upfront systemic therapy or intensified radiotherapy at the relapse sites.

“[The Children’s Oncology Group trial AHOD0431 examined whether reducing upfront treatment in early-stage, low‐risk cHL] by using a response‐based approach with minimal initial chemotherapy and omission of involved‐field radiotherapy (IFRT) in [patients with complete response (CR)] could maintain overall survival and event‐free survival (EFS) while reducing late toxicity,” the researchers wrote in their report. “The investigators found that a slow early response (SER) at the first [PET scan after 1 cycle] was prognostic for outcomes and associated with significantly worse EFS in the absence of IFRT despite having a [CR] at the end of chemotherapy.”

In the present analysis, the researchers assessed the impact of PET1 and IFRT on outcomes and relapse pattern in patients on AHOD 0431 who underwent PET1 response assessment after AVPC (ClinicalTrials.gov Identifier: NCT00302003).

They defined “rapid early response” (RER) as a negative PET1 and “slow early response” (SER) as a positive PET1. Patients with a partial response (PR) by CT and functional imaging following 3 chemotherapy cycles received 21-Gy IFRT, while patients with CR received no IFRT. The investigators evaluated progression-free survival (PFS) for the patients with RER and SER treated with or without IFRT. They also assessed recurrence sites (initial, new, or both) and characterized relapses involving initial sites as those “within PET1+ site” or “initially involved but outside PET1+ site”.

Limitations of the study included the exploratory nature, which did not reflect specific upfront planned endpoints, and the small sample size in some subgroups. 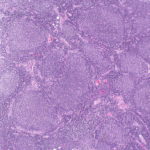