In the real-world setting, patients with mantle cell lymphoma (MCL) treated with first-line Bruton’s tyrosine kinase (BTK) inhibitors have a median survival of about 35 months, according to research published in Blood Advances. The analysis also suggested, however, that BTK inhibitor treatment may reduce the negative impact of TP53 mutations.

MCL accounts for up to 10% of all non-Hodgkin lymphomas. Although many treatments recently introduced have improved MCL-related outcomes, the disease’s course is known to be highly heterogenous, with clinical, biological, and patient factors affecting an individual’s prognosis. MCL is, moreover, considered incurable.

In order to determine the effects of novel therapies in the MCL setting, it is essential, according to previous work, that real-world data be analyzed. Although clinical trials are foundational for determining a drug’s likely effects in real-world populations, inclusion criteria can make it difficult to generalize past study samples. For this study, researchers evaluated real-world data to determine treatment patterns and clinical outcomes among patients with MCL.

While short median survival periods were noted among patients with deletion 17p or a TP53 mutation (42 months), as well as those with blastoid disease (26 months), BTK inhibitors mitigated the impact of the former characteristic (hazard ratio, 1.17; 95% CI, 0.88-1.55).

“With longer [overall survival] with BTK inhibitors in the frontline setting (vs subsequent lines) and without the negative influence of del17p/TP53 mutations, our study provides preliminary evidence supporting the use of BTK inhibitors in frail patients who are unable to tolerate intensive frontline chemoimmunotherapy,” the authors wrote in their report. 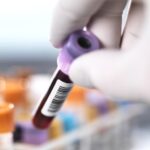