Lymphoma-associated macrophages (LAMs) may affect the prognosis of patients with mantle cell lymphoma (MCL), according to research published in Frontiers in Oncology.

Many patients with MCL tend to have poor overall survival (OS), as most are diagnosed at later stages with an aggressive disease course. However, about 15% of cases are indolent and have a longer OS of 7 to 10 years.

Understanding the tumor microenvironment may allow for risk-adjusted therapies based on prognostic subgroups. Programmed death-1 receptor ligands (PD-L1/PD-L2) have been studied in some B-cell lymphomas, but their role in MCL has not been heavily studied.

M1 and M2 LAMs are associated with many types of lymphoma, but their clinical significance in MCL has not been fully characterized.

This retrospective study evaluated PD-L1 expression of LAMs in MCL and their prognostic impact. The study included 82 patients with MCL who had a median age at diagnosis of 67 years. A total of 96% of patients were diagnosed at stage III or IV.

A total of 73 patients with MCL were included in the assay for CD68+ and CD163+ macrophage cell count. To evaluate the MCL microenvironment, the study used quantitative imaging analysis on tissue microarray sections.

Patients with high expression of PD-L1 on M1 LAMs had slightly better OS, while increased PD-L1 expression on M2 LAMs was associated with slightly lower OS. However, neither reached statistical significance.

The authors concluded that M1 and M2 LAM counts may be used to stratify patients with MCL in risk categories. Further studies with more patients are needed but enhanced understanding of the lymphoma microenvironment in MCL may open new possibilities for immunotherapy. 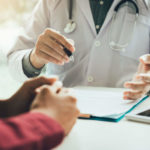