Patients with aggressive B-cell lymphomas (BCL) whose disease relapses after chimeric antigen receptor (CAR) T-cell therapy experience poor outcomes, particularly among patients who relapse within 30 days, according to the results of study published in the journal Blood.

“Treatment of patients with relapsed/refractory aggressive BCL after failure of anti-CD-19 CAR T-cell constitutes an unmet medical need, and further innovative strategies are needed,” the authors wrote in their report.

In this study, data of 550 patients from the DESCAR-T registry were evaluated for outcomes after receiving anti-CD19-CAR T-cell therapy with either axicabtagene ciloleucel or tisagenlecleucel. The median follow-up was 7.9 months.

The majority of patients in the cohort had diffuse large B-cell lymphoma, 57% of patients had more than 3 lines of prior treatment, and 19% had a prior autologous transplant. There were 39% of patients with a lactate dehydrogenase (LDH) prior to infusion above the upper normal limit (UNL).

There were 58% of patients who achieved a complete remission, 11% who experienced a partial remission, and 1% with stable disease. There were 43.3% who had progressive disease. The overall progression-free survival (PFS) for the entire cohort was 4.6 months and median overall survival (OS) was 11.1 months.

The median time to CAR T-cell failure was 2.7 months, with the majority of patients developing relapse at 2 months or later. There were 22.7% of patients who experienced progression within 30 days, 42.9% between days 31 and 90, and 34.5% after day 90. The median PFS after failure was 2.8 months and the median OS was 5.2 months. For patients whose disease relapsed within 30 days of CAR T-cell therapy, the median PFS and OS were 1.7 months and 1.9 months, respectively.

There were data available for 154 patients who were treated after CAR T-cell therapy, which most commonly included lenalidomide and targeted therapy, with bispecific antibodies, radiotherapy, and combined immunochemotherapy to a lesser extent.

Response to subsequent treatment was low, with an overall rate of 14.1% and a complete remission rate of 6.6%. There were 70.8% of patients whose disease progressed.

The authors concluded that “this DESCAR-T registry study confirms that outcomes of patients following failure of CAR T-cell treatment remain extremely poor, and outcome are worse in the event of failure within the first month.” 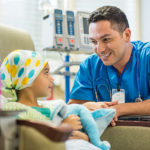 High EFS, High Rate of Thrombosis With Crizotinib Plus Chemo in Pediatric ALCL