Common laboratory measures of inflammation are associated with immune-related toxicities after chimeric antigen receptor (CAR) T-cell therapy and may guide risk-stratification, according to research published in Blood Advances.

CAR-T therapy is associated with a risk of developing cytokine release syndrome (CRS) and immune effector cell-associated neurotoxicity syndrome (ICANS). It is difficult to predict which patients are at higher risk for immune-related toxicities.

The study authors evaluated whether EASIX score before lymphodepletion is related to CRS and ICANS. They also evaluated other inflammatory biomarkers to determine if they have prognostic significance.

The authors concluded that EASIX score before lymphodepletion and measures of ferritin and C-reactive protein (CRP) are associated with the incidence and severity of CRS and ICANS in patients with LBCL who are treated with axi-cel. They recommend a modified version of the scores with EASIX-F for CRS and EASIX-FC for ICANS risk stratification. The authors noted that the modified EASIX score had a stronger association with immune-related toxicities than each measure on its own.

The study had several limitations, including a small sample size, no validation cohort, and the use of only one type of CAR-T product. Larger studies are needed to validate prognostic measures for CAR-T therapy, but these results may aid in choosing high-risk patients for clinical trials. 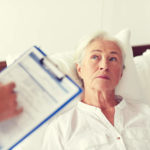