For patients with nongerminal center B-cell-like (non-GCB) diffuse large B-cell lymphoma (DLBCL), the addition of ibrutinib to therapy based on rituximab with cyclophosphamide, doxorubicin, vincristine, and prednisone (R-CHOP) was recently shown to improve outcomes for patients younger than 60 years of age, but not for patients age 60 or older. Study results were published in the Journal of Clinical Oncology.

In this phase 3 trial, patients were randomized to receive either ibrutinib plus R-CHOP (419 patients) or a placebo plus R-CHOP (419 patients). Event-free survival (EFS) was the primary endpoint, evaluated for both the intent-to-treat (TT) population and patients with activated B-cell (ABC) DLBCL. Overall survival (OS), progression-free survival (PFS), and safety were secondary endpoints. A preplanned subgroup analysis examined the influence of age.

The primary endpoint of EFS was not met for either the ITT or the ABC DLBCL groups. Overall, OS and PFS endpoints were also not met. However, responses differed by age groups.

Although ibrutinib plus R-CHOP improved outcomes for younger patients with DLBCL, for older patients, this combination was associated with lower tolerability and nonsuperior outcomes. 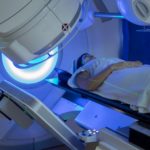