Obinutuzumab and lenalidomide — known as the GALEN regimen — appear to yield desirable clinical outcomes without a high degree of toxicity among patients with previously untreated with follicular lymphoma (FL), according to research published in Blood.

FL accounts for approximately one-third of diagnosed cases of indolent lymphomas. While rituximab-based regimens that include chemotherapy have improved outcomes in this patient population over the past several decades, the use of a chemotherapy-free rituximab and lenalidomide combination appeared, in previous study, to yield good survival outcomes, with fewer adverse events than those seen with regimens that include chemotherapy.

Previous research suggests that obinutuzumab, a type 2 anti-CD20 monoclonal antibody, may improve antibody-dependent cellular toxicity compared with rituximab, and showed promising efficacy results when combined with chemotherapy in the FL setting. For this phase 2 study (ClinicalTrials.gov Identifier: NCT01582776), researchers evaluated the safety and efficacy of the GALEN regimen among previously untreated patients with FL.

Patients received the drug combination for 6 months; this was followed by 1 year of combination maintenance and 1 year of obinutuzumab-only maintenance. The study’s primary endpoint was complete response rate.

The median follow-up was 3.7 years, at which point the 3-year progression-free and overall survival rates were 82% and 94%, respectively. 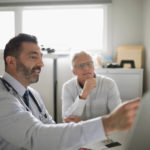