SARS-CoV-2 mRNA vaccination-induced immune responses vary among patients with hematologic malignancies, with some having persistent lack of serological response after 3 vaccinations, according to a report published in Blood Cancer Discovery.

Researchers evaluated the anti-spike T cell and antibody responses to SARS-CoV-2 mRNA vaccines (BNT162b2 and mRNA-1273) in patients with B-cell malignancies in a real-world setting. They used data from The Leukemia and Lymphoma Society National Registry and a next generation sequencing-based molecular assay to assess SARS-CoV-2-specific T cell responses.

After the second vaccine dose, the researchers found that 58% of sero-positive and 45% of sero-negative patients display anti-spike T-cells. They also observed that the percentage of patients who were T-cell positive was higher among patients who received mRNA-1273 vaccines compared with those who received BNT162b2 vaccines (52% vs 40%; P =.001).

The researchers also found that anti-spike antibody levels are depressed by B-cell suppressive or depleting therapies, including BTK inhibitors, anti-CD20 antibodies, or both. They demonstrated that patients who had no treatment showed a marked increase in anti-spike antibody levels (median, 112 AU/mL to 2500 AU/mL) before and after the third SARS-CoV-2 mRNA vaccine dose, whereas those on treatment displayed a smaller increase (median, 0.4 AU/mL to 10 AU/mL). 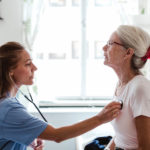