Patients with relapsed, advanced, and indolent NHL are often treated with rituximab-based therapy combinations, which are considered standard of care in this setting. Copanlisib is a PI3K inhibitor that previously demonstrated strong outcomes in, and was consequently approved for, patients with pretreated, relapsed follicular lymphoma.

The phase 3 CHRONOS-3 study (ClinicalTrials.gov Identifier: NCT02367040) compared the safety and efficacy of rituximab plus copanlisib with rituximab plus placebo in patients with relapsed, indolent NHL. The primary data from the trial were presented.

Enrolled patients (458; median age, 63 years) were randomly assigned 2:1 to the copanlisib group (307 patients) or the placebo group (151 patients). All patients had relapsed, indolent disease, and had not been on treatment and had not had disease progression for at least 12 months after receiving a rituximab-based treatment. The study’s primary endpoint was progression-free survival (PFS).

The majority of patients (60%) had follicular lymphoma, 20.7% had marginal zone lymphoma, 10.9% had small lymphocytic lymphoma, and 8.3% had lymphoplasmacytic lymphoma/Waldenström macroglobulinemia.

The overall response and complete response rates in the copanlisib group were 81% and 34%, respectively, compared with 48% and 15%, respectively, in the placebo group. The median overall survival was not estimable. 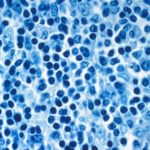