The addition of the programmed death-ligand 1 inhibitor atezolizumab to an obinutuzumab-bendamustine chemoimmunotherapy regimen does not further improve progression-free survival (PFS) relative to that previously reported for obinutuzumab-bendamustine and carries an increased risk of adverse events (AEs) in patients with previously untreated follicular lymphoma (FL), according to research published in Blood Advances.

Researchers conducted a phase 1b/2 trial to evaluated the safety and efficacy of atezolizumab-obinutuzumab-bendamustine in adult patients with previously untreated FL (ClinicalTrials.gov Identifier: NCT02596971).

Patients who achieved CR or partial response (PR) at the end of induction were administered maintenance therapy  (atezolizumab, 840 mg on days 1 and 2 of each month, and obinutuzumab, 1000 mg on day 1 of every other month) for up to 24 months or until disease progression or unacceptable toxicity.

Of 21 patients who had circulating lymphoma-specific clonotypes at baseline, the investigators found that all these patients were MRD-negative (10-5 sensitivity) at the end of induction, with 76.2% in CR, 14.3% in PR, and 9.5% with stable disease (IRC assessed).

Limitations of the study included the modest number of patients with untreated FL, lack of a control group, and limited follow-up duration.

Disclosure: This research was supported by F. Hoffmann-La Roche Ltd. Please see the original reference for a full list of disclosures. 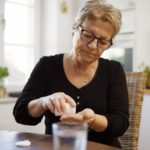