Treosulfan in conjunction with fludarabine may yield superior outcomes compared with busulfan for conditioning prior to allogeneic haemopoietic stem cell transplantation (HSCT) for patients with acute myeloid leukemia (AML) or myelodysplastic syndrome (MDS), according to research published in The Lancet Haematology.

More than half of HSCTs conducted for patients with any malignancy worldwide are for those with AML or MDS. Although this procedure can lead to long-term health improvements, many patients experience disease recurrence, and age, performance status, and pretransplant comorbidity or organ function impairment each correlate with risk for nonrelapse mortality.

Given the risk for nonrelapse mortality, there is ongoing controversy about whether to recommend maximum tolerable or minimum effective conditioning regimens prior to HSCT. Although busulfan forms the basis of a widely used regimen, some data suggest that treosulfan — a water-soluble, bifunctional alkylating drug — may be a noninferior option.

The authors concluded that the treosulfan regimen exhibited improved event-free and overall survival, HSCT-related mortality, and nonrelapse mortality compared with the busulfan regimen, suggesting that “this regimen has the potential to become a standard preparative regimen before allogeneic HSCT in patients with AML and MDS at increased mortality risk for myeloablative conditioning.” 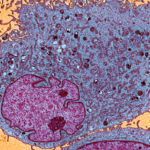