Adding obinutuzumab to ibrutinib among patients with chronic lymphocytic leukemia (CLL) may permit earlier ibrutinib discontinuation, according to research published in Advances in Hematology.

Previous research has shown that ibrutinib, a Bruton tyrosine kinase inhibitor, is effective as a first-line monotherapy in CLL. These results were seen in improved rates in overall response, overall survival, and progression-free survival, leading to the approval of ibrutinib as either a frontline therapy for CLL or for patients unfit for chemotherapy.

There is, however, also evidence that the rate of complete responses (CRs) in this patient population is low. Ibrutinib is, furthermore, linked with both financial toxicity in the United States and a relatively high rate of adverse events, suggesting that earlier discontinuation, where possible, may be an optimal therapeutic strategy.

“Overall, we show that the combination of ibrutinib and obinutuzumab as first-line treatment in CLL patients that either refuse or were considered unsuitable for standard chemoimmunotherapy is safe, is highly effective, and induces deep responses associated with [undetectable minimal residual disease],” the authors wrote. 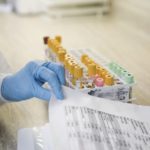