The use of blinatumomab, a bispecific T-cell engager (BiTE) that leads to T cell-mediated lysis of CD19-expressing B cells, yielded encouraging response rates and rare severe adverse events in pediatric patients with relapsed or refractory (R/R) B-cell precursor (BCP)-acute lymphoblastic leukemia (ALL), according to results of a study published in the European Journal of Haematology.1

The retrospective single-center analysis included 38 patients treated with blinatumomab over a period of 10 years. According to the authors, this represents the cohort of pediatric patients with the longest observation time after treatment with blinatumomab. Of the 38 patients, 16 had participated in the phase 1/2 clinical trial for the BiTE (ClinicalTrials.gov Identifier: NCT01471782).2

The median age at onset of therapy was 9.8 years (range, 1.1-20.7 years). Most patients (71%) had undergone at least 1 hematopoietic stem cell transplantation (HSCT) prior to treatment.

Patients received blinatumomab by continuous intravenous infusion for 28 days, at a dose of 5 μg/m2/d, which was then escalated to 15 μg/m2/d; however, 2 patients with highly refractory disease received 30 μg/m2/d. A single cycle was administered to 18 patients, while 20 patients received 2 to 5 cycles. To mitigate possible side effects, in particular, cytokine release syndrome (CRS) and neurotoxicity, patients (68%) also received at least 1 dose of dexamethasone; only those with highly resistant disease (n=12) did not.

Response to blinatumomab was documented in 13 of 38 patients (34%). Of those, 8 achieved complete remission (CR, <5% leukemic blasts in bone marrow) after cycle 1, and 3 patients achieved CR after cycle 2. An additional 2 patients with overt leukemia achieved CR in bone marrow but extramedullary disease remained. Complete minimal residual disease negativity (sensitivity, 1E-04) was achieved in 8 of 38 patients (21%), including among 5 long-term survivors which enabled transition to haploidentical HSCT.

Frequent adverse events were predominantly febrile reactions during blinatumomab infusion (84%). In addition, approximately half of the patients developed a cytokine release syndrome at some point during treatment (during cycle 1, 52%; over all cycles, 51%). Neurotoxicity events occurred in 8 of 78 cycles (15%).

To date, 9 patients (24%) are alive and remain in molecular remission. All surviving patients underwent haploidentical HSCT following blinatumomab treatment. ALL relapse resulted in the deaths of 18 patients, and 9 patients died from severe infections in non-remission (n=3) and transplant-related complications in remission (n=6). The remaining 2 patients were lost to follow-up.

“Despite heavy pretreatment of most of our patients, severe adverse events were rare and response rates encouraging,” wrote the authors. “Blinatumomab is a valuable bridging salvage therapy for relapsed or refractory patients to a second or even third HSCT.”

Disclosure: Some authors have declared affiliations with the pharmaceutical industry. Please refer to the original study for a full list of disclosures. 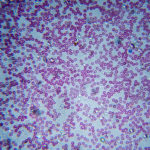