Lumoxiti, a CD22-directed cytotoxin, was approved for adults who have had at least two prior therapies for the disease. The FDA granted this application Fast Track and Priority Review designations. Lumoxiti also received Orphan Drug designation, which provides incentives to assist and encourage the development of drugs for rare diseases.

Lumoxiti was evaluated in a clinical study of 80 patients who had been treated previously for HCL. The most common side effects included injection-related reactions, edema, nausea, fatigue, headache, fever, constipation, anemia, and diarrhea. The drug’s label includes a boxed warning of increased risk for capillary leak syndrome. The warning also notes increased risk of hemolytic uremic syndrome. Breastfeeding women should not take the drug, the FDA urged.

“This therapy is the result of important research conducted by the National Cancer Institute that led to the development and clinical trials of this new type of treatment for patients with this rare blood cancer,” Richard Pazdur, M.D., director of the FDA’s Office of Hematology and Oncology Products, said in a statement.

Lumoxiti is produced by AstraZeneca, based in the United Kingdom. 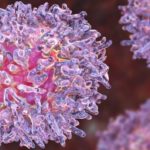