Bruce
Levine, PhD, recalls a time in the early
2000s, when he and his colleagues from the University of Pennsylvania (UPenn)
Perelman School of Medicine in Philadelphia were doing preclinical work on T
cells and chimeric antigen receptor (CAR) T-cell (CAR-T) therapies and no one
was paying any attention. The sessions on CAR-T cells at medical meetings would
be on the last day of the conference, during odd hours within the conference
program, or conducted “in a room nobody could find, [with] hardly anyone
there,” he told Cancer Therapy Advisor.
“Now there are overflow rooms, and overflow to the overflow, and it’s really incredible
how this has exploded.”

Despite
the exciting advancements that have been seen with immunomodulatory therapies since
the early 2000s, there have been some developments that caused fresh concern
about the use of such adoptive cell therapies. In a case report, a single blast
cell that was collected in the apheresis product and not removed during
manufacturing was reinfused to the patient.1 The leukemic cell had
become transduced with the gene encoding the CD19 CAR, which bound in cis to
the CD19 on the cell surface, masking it from recognition by CAR 19 T cells.

The single
leukemic B cell expressing the CAR targeting CD19 was delivered, this
invisible cell expanded, and the patient under investigation died from
progressive leukemia.

Cancer Therapy Advisor spoke to Dr Levine about how this could have happened, and broadly, what design approaches for CAR-based medications will help keep remissions durable and responses persistent. We asked Dr Levine, who is also president-elect of the International Society for Cell and Gene Therapy (ISCT), about the multipronged targeting approach that may be required when patients develop therapeutic resistance to CAR-T after their cells have lost the target antigen receptors that are necessary for recognition by the immune system.

[This interview has been edited and condensed for clarity.]

Cancer Therapy Advisor (CTA):  My
first question is in relation to the finding that there was a single leukemic
cell that snuck into the manufacturing process for one of the cell therapies made
at the University of Pennsylvania. Can you discuss this? What are the
differences between UPenn’s setup for manufacturing versus a commercial
setting?

Dr Levine:  It still is true that there is no way to
guarantee that there hasn’t been a leukemic cell coming through. We have made
modifications to our manufacturing process for some trials that are being
rolled out and to other trials that reduce the likelihood of that type of event
happening by about a factor of a million. So, it is theoretically possible,
because these patients do have leukemic cells circulating in their blood, and
they are collected, and we do attempt to remove them and to enrich for T cells.  So, one can’t ever say never, I think — that it would never happen [again] — but certainly
much less likely than it was.

To answer your question on
manufacturing and our manufacturing facility, we actually have 2 facilities
across the street from one another, and we have those equipped and operated in
a way such that the final cell products are tested for safety, purity, and
identity in accordance with criteria that we have submitted to the FDA [US Food
and Drug Administration], and the FDA has accepted, or in some cases, [for
which FDA] has requested modifications (that we have made).

The commercial operations have
to adhere to the same things in the context of their clinical trials. What may
differ slightly is in some of the testing methods or some of the equipment — and
in the case of commercial approval, there may be some specifications that are
different than [those used] during the clinical trials. 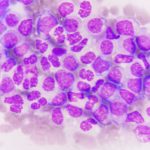