Among pediatric patients with acute lymphoblastic leukemia (ALL), peripheral blood blast and platelet counts are together highly predictive of clinical and survival outcomes, according to research published in Medicine.

ALL accounts for nearly one-fifth of all pediatric cancers, and although survival rates have greatly improved in the past several decades, around 20% of patients will relapse. Despite therapeutic improvements, this still carries a poor prognosis.

Several hematological and biological features have been identified that aid in prediction of relapse and risk stratification. A frequently used variable is the presence of minimal residual disease (MRD), which has repeatedly been shown to be highly prognostically significant, although MRD monitoring is not always possible.

Other independent variables with suggested prognostic relevance include time to platelet recovery or platelet count post–induction therapy and peripheral blood blast counts, though these variables have not previously been evaluated as a combined prognostic marker. For this study, researchers evaluated the prognostic value of this combined marker among pediatric patients with ALL.

Univariate and multivariate analysis suggested, furthermore, that low blast counts on day 8, coupled with high platelet counts on day 33, were predictive of both EFS and OS. The combination predictive marker correlated well with risk stratification based on MRD status.

“Based on data from the current study, the combination of low blast count on day 8 and high platelet count on day 33 was found to be independently associated with a superior outcome in patients with ALL,” the authors wrote. “Therefore, the combined use of blast and platelet counts during and after induction treatment for childhood ALL was a strong candidate prognostic factor for the improvement of risk stratification when MRD was not available.” 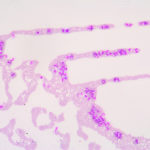