In a new study, researchers identified a possible immunosuppressive role for CD200 expression in leukemia stem cells (LSCs) associated with acute myeloid leukemia (AML). The study was reported in the Journal for ImmunoTherapy of Cancer.

“Most patients with AML achieve remission after induction chemotherapy, but relapse and become unresponsive to traditional treatment,” the researchers wrote in their report. They explained that relapse is hypothesized to result LSCs that are resistant to therapy.

The researchers examined both stem cell datasets and patient samples and found CD200 overexpression in AML LSCs, with a possible function as an immune checkpoint. They then altered CD200 in cell line models to evaluate any interactions between CD200+ AML cells and immune cells, and these evaluations were constructed both in vitro and in peripheral blood mononuclear cell (PBMC)-humanized mouse models. A fully humanized anti-CD200 antibody also was constructed to inhibit the interaction between CD200 and its receptor, in addition to initiating an Fc-mediated response.

Overexpression of CD200 was seen in AML LSCs in this study, and its expression showed immunosuppressive activity through impairment of cytokine secretion. PBMC-humanized mice also showed rapid progression of CD200+ AML, unlike what was seen with CD200– AML.

CD200 expression within AML cells appeared to inhibit T-cell activity through effects on T cells’ metabolic activity related to oxidative phosphorylation. This was suggested by a gene set enrichment analysis and further supported in experiments involving coculturing of T cells and CD200+ AML cells; this showed impairment of oxygen consumption in T cells exposed to this treatment. Another test suggested reduced glycolytic activity in a stressed condition with T cells that were cultured with CD200+ AML cells. Collectively, the researchers reported that the results provided evidence for immunosuppression in association with metabolic changes induced by CD200+ AML cells.

The researchers considered the study’s results to support the potential for CD200 antibody-based therapy to limit AML relapse. “Collectively, we offer a new paradigm of LSC-specific immunosuppression via overexpression of CD200 that will facilitate further investigations into exploiting stem cell–specific immunology to eliminate LSCs and cure poor-risk AML subsets by immunotherapy,” the researchers concluded in their report. 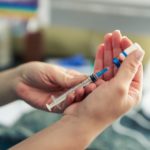