Contrary to previous research, some patients with atopy who undergo allogeneic hematopoietic cell transplantation (AHCT) may be cured even if the donor is atopic, according to research published in Bone Marrow Transplantation.

“In conclusion, ‘cure’ of atopy with HCT occurs in about half patients, albeit probably not due to the replacement of atopic with nonatopic immune system but possibly due to an immune reset analogous to that observed in some autoimmune disease patients after autologous HCT,” the authors concluded. They added that prospective trials are needed to confirm these findings. 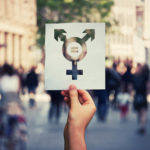 Communicating With the Transgender Patient With Cancer