The introduction of haploidentical hematopoietic stem cell transplantation (SCT) helped to provide care for patients where there was a shortage of donors. Data suggest that this process has become more common over the last several years, providing much-needed treatment to patients with hematologic cancers including AML, MDS, and ALL.

Graft vs host disease rates at 100 days and at 1 year, the 1-year cumulative relapse rates, and the 1-year non-relapse mortality rates did not significantly differ between the 2 arms.

Differences in overall survival and disease-free survival rates, similarly, were above the statistical threshold of significance.

“In summary, the findings of this study indicate that haploidentical PBSCT supported by third-party cord blood results in [overall survival] and cumulative incidences of [graft-vs-host disease], [non-relapse mortality], and relapse, similar to those of MSD PBSCT, although the patients with high-risk features in the haplo-cord-PBSCT group were more than those in the MSD-PBSCT group,” the authors wrote in their report. 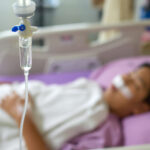