Researchers sought to increase the rate at which serious illness conversations (SICs) occur through an interdisciplinary project involving 3 oncology clinics. The researchers described the project and its results in a recent report in JCO Oncology Practice.

The project involved a team that included a palliative care physician who had SIC communication training, 3 medical oncology clinicians, a patient’s family member, 2 nurse navigators, 2 social workers, 1 scheduling secretary, and 1 performance improvement specialist. The clinicians included 2 physicians and 1 advanced practice registered nurse. The project was part of a larger initiative based at the Dartmouth-Hitchcock Norris Cotton Cancer Center in Manchester, New Hampshire. Other individuals from the initiative were also involved in providing guidance.

The project included a global aim involving promotion of goal-concordant care for patients with serious illness through the implementation of an SIC program. The researchers also included a SMART aim in their approach, which involved improving the frequency of documented SICs to a rate of 25% among eligible patients by December 31, 2020.

Prior to beginning the project, the team had created a documentation form incorporated within the electronic medical records (EMR) system. The performance of the documentation effort was analyzed based on SIC documentation data in the EMR system obtained over an 18-month study period.

Patients were screened for SIC eligibility based on a question regarding whether a team member would be surprised if that patient died in the next 2 years. Included patients had either head and neck cancer or sarcoma, and 63 patients in total were included in the analysis.

The rate of SICs was reportedly near zero at baseline, and it increased to a rate of approximately 70% over the study period. Among documentations of SICs during the study period, physicians had documented 57% of them, the advanced practice registered nurse documented 14%, and 30% were documented through specialty palliative care.

The SMART aim of SICs documented for 25% of patients was met. The aim underwent upward revisions throughout the project, and the stable median performance has been maintained at 72%. “However, our SMART aim was below national guideline recommendations specifying all patients with cancer,” the researchers noted in their report, also stating that they failed to surpass their SMART aim of more than 75% in the second half of the project period. They also noted that the project overlapped with the start of the COVID-19 pandemic, which impacted how healthcare delivery was performed.

The researchers intend to expand the research across oncology disciplines and more clinics. “To better evaluate patient experience of SIC, we plan to collect relevant patient-reported outcome measures around the SIC visit and perform targeted interviews with different stakeholders to assess downstream care outcomes related to the receipt of goal-concordant care,” the researchers reported in their conclusion. 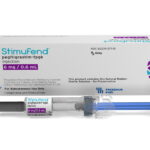 Stimufend, a Biosimilar to Neulasta, Gets FDA Approval