Rates of allogeneic hematopoietic stem cell transplantation (alloHCT) in patients with acute lymphoblastic leukemia (ALL), acute myelogenous leukemia (AML), and myelodysplastic syndrome (MDS) are associated with poverty rates in patients’ geographical areas, according to results reported in Biology of Blood and Marrow Transplantation.

Researchers analyzed data collected between 2000 and 2010 from the Center for International Blood and Marrow Transplant Research (CIBMTR) and the Surveillance, Epidemiology, and End Results Program (SEER) to evaluate rates of unrelated donor (URD) alloHCT in patients with ALL, AML, or MDS younger than 65 years. Rates were examined to determine if associations existed with county size or poverty levels in patients’ counties of residence.

The researchers noted that patients with ALL, AML, or MDS who lived in areas with high poverty rates were less likely to receive an URD alloHCT, and this association remained significant after adjusting for potential confounds such as rural residency and racial origin. They recommended further research on the most suitable strategies to reduce disparities in access to alloHCT. 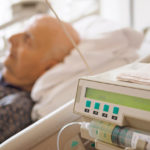 Discussing Goals of Care With Oncologist, Earlier May Decrease Use of Intensive Health Care at End of Life