AHA occurs most frequently in elderly patients, and, although rare, the incidence is increasing. AHA is most often caused by antibodies against FVIII. About 20% of cases occur in patients with a hematologic malignancy. Autoimmune disorders and some newly developed drugs have also been associated with AHA. However, the underlying cause is unknown in about 50% to 60% of patients.

AHA is estimated to occur in about 1 to 4 patients per million, and because it’s so rare, there’s often a long time between the first bleeding event and diagnosis, about 22 days.

Treatment also aims to eradicate auto-antibodies against FVIII with immunosuppressive agents. Corticosteroids with or without cyclophosphamide is the recommended treatment.

About 80% of patients achieve a complete remission of AHA after treatment. About 25% of patients relapse after stopping immunosuppression. Some studies have shown considerable mortality with AHA, most commonly because of infections or underlying malignancy.

AVWS is caused by an underlying hematologic malignancy in about half of patients, and about 20% of patients have a cardiovascular condition that causes aVWS.

AVWS can present with a range of bleeding events, including mucosal, joint and muscle bleeds. Screening tests look for a lack of family history, and abnormal primary and secondary hemostasis.

Managing aVWS depends on the underlying cause of the disorder. Treatments include intravenous immunoglobulins (IVIG), FVIII/von Willebrand factor (VWF) concentrates, and desmopressin (DDAVP) as appropriate based on the patient’s diagnosis.

The prognosis for aVWS for many patients depends on the underlying cause and how easily it can be treated. Patients with IgG MGUS (monoclonal gammopathy of undetermined significance) tend to have a poorer prognosis than other causes, given the difficulty of treating IgG MGUS.

AHA and aVWS are difficult to diagnose and treat, and require care in specialized hemophilia treatment centers. Both disorders present in elderly patients with no family history, but the bleeding events are different. Extensive cutaneous hematomas are associated with AHA, whereas mucosal bleeding, gastrointestinal bleeding, and joint bleeds are associated with aVWS. Treatment recommendations for both are currently based on expert opinion and registry data.

The study author declared affiliations with biotech, pharmaceutical, and/or device companies. Please see the original reference for a full list of authors’ disclosures. 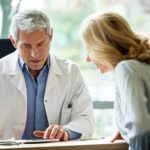