Apixaban may be associated with better prevention of recurrent venous thromboembolism (VTE) and major bleeding, according to research published in The Lancet Haematology.

Direct-acting oral anticoagulants (DOACs), including apixaban and rivaroxaban, have emerged in recent years as favorable therapeutic options for patients with VTE. However, no prior studies have compared the safety and efficacy of different DOACs.

In this study, researchers conducted a retrospective cohort analysis using data from the Truven Health MarketScan commercial and Medicare Supplement claims databases. In total, 15,254 treatment-naive, newly diagnosed patients with VTE who were recently initiated on apixaban (3091 patients) or rivaroxaban (12,163 patients) were evaluated.

Additionally, results from a subgroup analysis suggested that patients older than 65 years may have different outcomes compared with younger patients. However, the authors were unable to explain this interaction and noted that future studies are warranted to assess the potential benefit of apixaban in patients aged 65 years or older.

The authors acknowledged some limitations to their study, including their inability to capture fatal outcome events that occurred in inpatients settings and their decision to exclude other therapeutic drugs, such as warfarin and dabigatran, from their comparison. They cautioned that generalizability of their results to populations other than patients with VTE who have been covered by commercial or Medicare Supplement insurance for at least 1 year may be restricted. 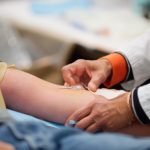 Updates to Transfusion Strategies for Major Hemorrhage in Trauma