Male children with von Willebrand Disease (VWD) may be more likely to report bleeding incidents and to use treatment products for the condition compared with female children, according to study results published in the American Journal of Hematology. However, the researchers did not find a significant difference in quality of life or well-being between male and female patients.

VWD is the most common heritable blood disorder, affecting up to 1.3% of the population. The condition is caused by a dysfunctional or missing VWF gene, which transcribes protein that plays a role in coagulation, platelet adhesion, and aggregation during hemostasis. There are 3 known types of VWD: type 1, caused by quantitative reduction of the VWF protein; type 2, caused by reduced activity or functionality of VWF; and type 3, caused by the absence of von Willebrand factor (VWF).

Although VWD is common, it is often asymptomatic, with symptomatic VWD present in fewer than 1 in 1000 adults and children. Furthermore, there is little information about VWD differences by sex during preadolescence.

Patients with type 3 disease tended to be diagnosed earlier, with a mean age at diagnosis of 0.8 years among male patients and 1.5 years among female patients. Boys with type 1 or 2 VWD were also more likely to report bleeds compared with girls with the same types.

There was no difference in quality of life or well-being between the 2 genders, though patients with type 3 disease were more likely to need mobility assistance and to show “the early stages of lower well-being status compared with children with type 1 VWD and type 2 VWD.”

The authors noted, “Awareness of these bleeding differences and continued vigilance of care may improve outcomes for children with VWD.” 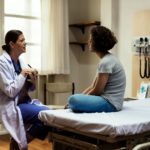 Bleeding Disorders Are Prevalent in Adolescents With Heavy Menstrual Bleeding