The recent decrease in mortality due to cardiovascular disease is generally attributed to a multipronged approach that includes public health measures and risk factor control, as well as a significant increase in the use of percutaneous coronary intervention from 1993 to 2013. The increased use of percutaneous coronary intervention usage has been accompanied by rising usage of single or dual antiplatelet therapy (APT) as a measure to prevent stent occlusion.

However, because these drugs prevent platelet aggregation, there is an associated risk for bleeding ranging from minor skin bruising to serious events such as intracranial hemorrhage (ICH). Additionally, there is an increased need for surgical intervention in a subgroup of patients who require APT as part of their treatment regimen who exhibit comorbidities or have advanced age. Clinicians therefore face a conundrum in this patient population. Evidence shows that postoperative continuation of APT is associated with a risk for bleeding, but discontinuation can raise the risk for cardiovascular events. There is also a lack of robust guidelines on managing these clinical situations, although recent studies have provided important data for the medical community.

In a paper published in Blood Reviews, Dawn Swan MD, from Galway University Hospital in Ireland, and colleagues reviewed recent guidance on managing the various types of bleeding episodes that can occur in patients receiving APT. They also discussed treatment strategies for patients who require emergency or elective surgery. The researchers offered recommendations surrounding the most commonly used therapeutics: aspirin; the adenosine diphosphate inhibitors clopidogrel, prasugrel, and ticagrelor; and the glycoprotein IIb/IIIa inhibitors.

“This review highlights the challenges in [treating] patients who require APT to prevent ischemic events yet sustain bleeding or may require surgery,” commented Usman Baber, MD, a cardiologist at Mount Sinai Hospital in New York, New York. “Although tools exist to quantify bleeding and ischemic risk, they are imperfect and likely underutilized. Decisions with respect to surgery are largely derived from nonrandomized studies, which illustrates an important evidence gap to properly inform clinical decisions.”

Spontaneous ICH underlies approximately 6% to 20% of all strokes, with a 30-day mortality rate of 40%. It is unclear whether concurrent APT plays a significant role in overall morbidity and mortality. However, observational studies suggest an association between aspirin use and development of cerebral microbleeds, which, in turn, can heighten the risk for spontaneous ICH.

Because the role of APT in ICH remains unclear, “it is unsurprising that optimal [treatment] of these patients is also unclear,” the researchers wrote.

For patients who require neurosurgery, the general consensus is to administer platelet transfusions, though the optimal dose and timing are uncertain. For patients who do not require surgery, the available evidence is more conflicting. Although 1 small study of patients with acute ICH and reduced platelet activity found that platelet transfusion within 12 hours of the event was assocationed with improved functional outcomes at 3 months, a much larger randomized controlled trial found that platelet transfusions were inferior to standard care, and patients treated with platelets experienced a greater number of adverse events.

Keeping this limited evidence in mind, the “practice point” is that patients with ICH taking APT should receive platelets only if they will be undergoing surgery but not if they will be managed medically.

Gastrointestinal hemorrhage (GIH) is a common occurrence observed in patients with or without concomitant antiplatelet medications. Studies have shown some association with APT. For instance, a meta-analysis of 14 trials that found low-dose aspirin (75 mg – 300 mg) to be associated with a relative risk of approximately 2 for major GIH. Aspirin combined with clopidogrel has also been found to be associated with GIH, with reported rates of 1.3% to 4.6% per year, and the newer P2Y12 inhibitors prasugrel and ticagrelor have been reported to cause gastrointestinal bleeding at higher rates compared with clopidogrel.

Patients with upper GIH do not derive a beneﬁt from platelet transfusions but instead need urgent endoscopic control of bleeding. All patients should be treated with proton pump inhibitors unless otherwise contraindicated, as these agents have been shown to improve both treatment of the acute bleed and prevention of further bleeding episodes. APT may be restarted in cases where endoscopic control has been achieved and the risk for a recurrent bleed is low. In patients receiving single-agent therapy with a high risk of rebleeding, APT may be held for 3 to 7 days. For dual therapy, especially following cardiac stent insertion, continuation of aspirin is recommended, but the reintroduction of a second agent should be discussed with a cardiologist. 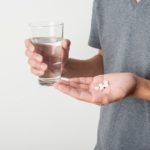