CPDs, rare disorders with clinically heterogenous presentations and outcomes, lack rigorous studies categorizing bleeding phenotypes. The International Society on Thrombosis and Haemostasis Bleeding Assessment Tool (ISTH-BAT), which documents a wide variety of bleeding symptoms, was designed as a screening tool, and does not offer phenotypic categorization of CPDs.

For this study, researchers “aimed to evaluate the bleeding phenotype of a large cohort of adult patients with CPDs and to search for correlations between the bleeding score and different laboratory phenotypes of CPDs.” All evaluated data were obtained from a nationwide cross-sectional study based in the Netherlands.

A total of 96 patients (64% women) were included in the study. The median ages for women and men were 38 years and 40 years, respectively. Patients were grouped by CPD subtype: isolated thrombocytopenia (23%), adenosine diphosphate (ADP) pathway defect (23%), thromboxane A2 (TxA2) pathway defect (16%), Glanzmann thrombasthenia (14%), dense granule deficiency (14%), complex abnormality (6%), and Bernard-Soulier syndrome (4%). By ISTH-BAT criteria, the median bleeding score was 9 for women and 6 for men.

Median bleeding scores were 21 for patients with Glanzmann thrombasthenia, 9 for Bernard-Soulier syndrome, 10 for dense granule deficiency, 7 for ADP pathway defect, 8 for TxA2 pathway defect, 6 for isolated thrombocytopenia, and 8 for complex abnormalities.

“In conclusion, in CPD patients most frequently occuring symptoms are [heavy menstrual bleeding] and bleeding after a hemostatic challenge. 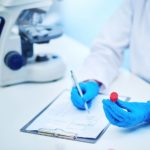