Brentuximab vedotin in combination with doxorubicin, vinblastine, and dacarbazine (A+AVD) was efficacious in the treatment a patient with sickle cell disease (SCD) diagnosed with Hodgkin lymphoma (HL), achieving a complete response while minimizing pulmonary toxicity, according to a case report published in Blood Advances.1

“Patients with SCD have more than a three-fold risk of developing HL and the outcomes in this unique population are understudied,” the authors wrote in the case report.

The team conducted a retrospective chart review of a 17-year-old female patient with HbSβ+ thalassemia SCD diagnosed with HL and discussed the considerations made in treatment planning to minimize therapy-related acute toxicity and late effects that could overlap with the patient’s preexisting SCD complications.

The patient presented for follow up after hospitalization for acute chest syndrome (ACS). At that time, her hemoglobin was 12.9 g/dL. Her patient history included 3 episodes of acute chest syndrome (ACS), 1 parvovirus-induced aplastic crisis, vaso-occlusive events (VOE), splenic sequestration, prematurity, and intubation at 2 weeks of life for respiratory syncytial virus.

Following a chest x-ray that revealed mediastinal lymphadenopathy and subsequent imaging and laboratory studies, the patient was diagnosed with Stage IIA HL — limited stage, unfavorable disease based on 4 nodal sites and an albumin level of 2.4 g/dL.

Because the patient had underlying SCD, history of ACS, and avascular necrosis (AVN) in the shoulders, the providers aimed to select a therapy that would minimize compounding toxicities. To do so, they decided to forego traditional risk-adapted therapy, which include doxorubicin, bleomycin, vinblastine (ABVD), and dacarbazine and vincristine, etoposide, prednisone, and doxorubicin (corticosteroids and radiation therapy would be necessary if the patient had not achieved a complete response after 2 cycles).

Given the patient’s history and high risk of morbidity and mortality associated with ACS, they sought to avoid both bleomycin and radiation therapy due to their potential induction of pulmonary toxicity as a late effect. They noted radiation therapy was also undesirable due to the patient’s increased risk of stroke from her underlying hemoglobinopathy. The team also sought to avoid the use of corticosteroids, which are known to have AVN as a late effect.

The providers decided to treat the patient with the A+AVD regimen, which is usually reserved for advanced stage disease, because in the ECHELON-1 trial (ClinicalTrials.gov Identifier: NCT01712490), rates of pulmonary toxicity were lower in the A+AVD group compared with those of the ABVD group (2% vs 7%). However, they did not use granulocyte colony stimulating factor, despite its inclusion on the investigational arm in ECHELON-1, given its ability cause severe or sometimes fatal crises in patients with SCD.2

They reported that the treatment course was complicated by vaso-occlusive events (VOE) in 4 of 6 cycles, which required inpatient admission lasting 7 to 17 days, and the patient required 9 red blood cell transfusions for treatment of refractory VOE.1

“Ultimately, our decision to treat a limited stage patient with A+AVD, a therapy normally reserved for advanced stage patients, was guided by a desire to avoid the theoretical risks of pulmonary toxicity and exacerbation of AVN. These risks were theoretical since malignancy outcomes in the SCD population are poorly studied,” the authors wrote. “In conclusion, the A+AVD regimen was efficacious in allowing for CR while minimizing pulmonary toxicity, but hematologist/oncologist should prepare for the possibility of VOE.” 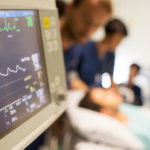