Among patients with sickle cell disease (SCD), elevated cell-free DNA (cfDNA), particularly mitochondrial cfDNA (cf-mtDNA), is involved in the pathological inflammation characteristic of the disease, according to research published in Blood.

Sampling and analysis of cfDNA, which is non-invasive, is a commonly used marker of disease prognosis in SCD. Patients with SCD have known differences in cfDNA levels from the general population.

For this study, researchers evaluated whether cfDNA is not only a marker of, but makes a contribution to, SCD pathophysiology. The authors used whole genome sequencing and quantitative polymerase chain reaction to determine differences in cfDNA between samples from patients with SCD and those from the general population. Flow cytometry, structured illumination microscopy, and electron microscopy were then used to evaluate functional differences in mitochondrial retention between patients with SCD and volunteers without SCD.

The authors suggested that mitochondria may, in light of these results, play a more important role in SCD pathophysiology than previously thought, owing to cf-mtDNA being an erythrocytic-DAMP.

“Our findings suggest that mitochondrial DNA is an underappreciated and important [erythrocytic]-DAMP in the ongoing pathological inflammation of SCD,” the authors wrote. “Further understanding of the crosstalk among various signature components of SCD–impaired mitophagy and ineffective erythropoiesis, hemolysis, inflammation triggered by non-erythroid cells…and the emerging immunomodulatory role of erythrocytes, will be vital in elucidating the underlying mechanisms among these components that contribute to the pathogenesis and pathophysiology of SCD.” 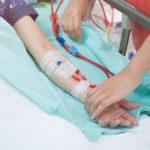 Haplo-Identical Donors as an Alternative for Patients With Fanconi Anemia