Both low and high levels of hemoglobin were associated with an increased risk of developing dementia, including Alzheimer disease, according to results from a population-based study published in Neurology. These abnormal levels of hemoglobin may indicate underlying differences in cerebral perfusion and in the integrity of white matter.

Researchers evaluated the long-term correlation of hemoglobin levels and anemia with the risk of developing dementia in the Rotterdam Study, an ongoing population-based cohort study in the Netherlands. Initiated in 1990 with 7983 subjects aged 55 years or older, the cohort expanded in 1999 by 3011 subjects and again in 2005 by 3932 subjects. Participants underwent extensive clinical evaluations and interviews every 4 years.

With a mean follow-up of 12.1 years, 1520 of 12,305 participants initially without dementia developed dementia. The majority of dementia that developed was Alzheimer disease (78.6%). Results indicated a U-shaped correlation whereby both low and high levels of hemoglobin were significantly associated with dementia (P =.005).

In 5267 participants who did not have dementia and had undergone a brain magnetic resonance imaging (MRI) scan, assessment of possible associations between hemoglobin levels and vascular brain disease, structural connectivity, and global cerebral perfusion revealed similar U-shaped correlations. In other words, low and high levels of hemoglobin were associated with differences in mean diffusivity for structural connectivity (P <.0001) and with white matter hyperintensity volume (P =.03). However, no associations existed between low and high hemoglobin levels and the presence of cortical and lacunar infarcts.

Cerebral microbleeds were more common in participants with anemia, and hemoglobin levels were inversely associated with cerebral perfusion (P <.0001).

The authors noted that the potential for residual confounding variables persisted, that the subset of participants who underwent MRI were more highly educated and more likely to be taking lipid-lowering medications, and that the cohort was predominantly composed of white participants.

They concluded by recommending additional research: “Given the potential implications for the burden of dementia globally, studies are needed to identify biological substrates, potentially focusing around disturbances in structural brain connectivity and cerebral blood flow regulation.” 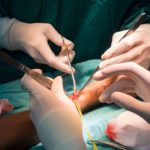