Because ineffective hematopoiesis secondary to the disease is often restricted to erythrocyte production only, erythrocyte transfusions have been shown to be an effective treatment for the disorder. Despite the benefits of chronic transfusions, they are often limited by toxicities such as hemochromatosis, which is commonly seen with lifelong transfusions. These blood transfusions are typically administered every 3 to 5 weeks and are recommended as a first-line option for children up to 1 year of age.

With respect to other treatment strategies, glucocorticoids are the only drug therapy to effectively treat erythroid failure in Diamond-Blackfan anemia. The majority of patients respond to an initial course of glucocorticoids; this response often manifests as a rise in hemoglobin or absolute reticulocyte count, which is expected after completion of glucocorticoid therapy. In children under 1 year of age, the use of these agents is not recommended but may still be considered in rare cases.

On the Horizon and Moving Forward

The search for novel molecular targets that could lead to drug therapies for Diamond-Blackfan anemia is ongoing. Currently, only preclinical trials are underway, which remains challenging for patients, researchers, and clinicians. In the meantime, raising awareness about the condition may help increase early disease detection and expand clinical development of novel therapies.

Jeffrey H Lipton, MD, PhD, of the cancer clinical research unit at the University of Toronto in Canada, told Hematology Advisor, “Unfortunately, as is the case with many rare diseases, the headlines that are associated with the big names just do not exist [for Diamond-Blackfan anemia]. Unless someone starts a patient group that raises funds or awareness, these diseases remain obscure to everyone except the patients involved and their families.”

Regarding early disease detection, Dr Cuvelier told Hematology Advisor, “Macrocytosis on the complete blood count is a rare and worrisome sign, particularly in the context of reticulocytopenia, and may indicate an underlying marrow failure syndrome such as Diamond-Blackfan anemia.” He noted that this was “underappreciated, particularly in children.”

Editor’s note: This article was updated on February 19, 2019, to correct Dr Lipton’s middle initial and affiliation. Dr Jeffrey H Lipton is affiliated with the cancer clinical research unit at the University of Toronto in Canada. 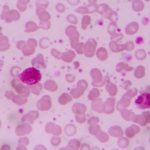