Dermatomyofibroma is a rare, benign, cutaneous neoplasm. Typically it presents as an indurated, plaque-like lesion on the shoulder girdle. Often the lesion will have been present for some time with slow growth. The prototypical patient is a young to middle-aged female; however, there have have been case reports of males and children with these lesions.

On physical examination, a dermatomyofibroma most often presents as an indurated, firm dermal plaque or nodule with or without overlying epidermal hyperpigmentation. Often these lesions are more easily palpated than seen. Dermatomyofibroma are usually seen on the upper trunk, upper arm, axilla, or neck, and are typically small with a normal size of 1 to 2cm. Larger lesions have been reported.

Because of its rarity, dermatomyofibroma usually requires biopsy for diagnostic confirmation. Histologically, dermatomyofibroma consists of a spindle cell proliferation that is arranged in well-defined, intersecting fascicles (Figure 1, hemoatoxylin and eosin). These spindle cells are often described as slender, and will arrange parallel to the epidermis. An important differentiating factor for dermatomyofibroma is the presence of normal to increased levels of elastic fibers, which are sometimes fragmented. This is in contrast to the reduced elastic fibers typically seen in dermatofibroma, hypertrophic scar, dermatofibrosarcoma protuberans, and pilar leiomyoma.

Typically, specimens of dermatomyofibroma extend to the superficial subcutis and have been reported on occasion to extend into the deeper subcutis. The adnexal structures are usually spared.

Special staining of histologic specimens of dermatomyofibroma is most often useful to rule out other similarly presenting lesions, rather than rule in the diagnosis. Dermatomyofibroma stains negatively with desmin, h-caldesmon, S-100, and epithelial membrane antigen. These stains are helpful to differentiate other tumors that may be in the differential such as neurofibroma, desmoplastic spindle cell nevus, extraneural spindle cell perineurioma, and smooth muscle tumors. These lesions will stain only focally positive for actins or CD34.

There is little value in imaging studies or serologic tests in known cases of dermatomyofibroma.

The etiology of dermatomyofibroma is unknown, but it is described as a benign proliferation of fibroblasts and myofibroblasts.

Currently, there are no known systemic implications of dermatomyofibroma. These lesions are rare enough, however, that such a correlation would be very difficult to recognize.

Treatment options for dermatomyofibroma are summarized in the Table 1.

Explanation of the benign nature of these lesions is usually all that is required for patient care. Biopsy will usually be required for definitive diagnosis as dermatomyofibroma clinically presents with a broad differential diagnosis.

Given the vague clinical presentation of these lesions, biopsy is usually warranted for more definitive diagnosis. Once diagnosis is established, there are no special scenarios of which to be aware. These are rare neoplasms, but benign.

Mentzel, T, Kutzner, H. “Dermatomyofibroma: clinicopathologic and immunohistochemical analysis of 56 cases and reappraisal of a rare and distinct cutaneous neoplasm”. Am J Dermatopathol. vol. 31. 2009. pp. 44-9. (A case series of dermatomyofibromas.) 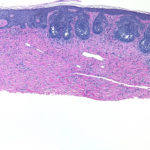