Extensive depigmentation of the skin and hair present since birth; alteration in eye pigmentation resulting in photosensitivity and decreased visual acuity; and recurrent severe bacterial infections especially in the respiratory tract and skin, may be features of the history. In some patients, periodonotitis has been reported, as have mild coagulation defects often manifesting as bruising, mucosal bleeding, and petechiae.

Hair color may range from grey to white depending on the ethnic background of the patient. Often hair displays a silvery sheen. Skin pigment dilution may not be appreciated unless compared with that of family members.

On peripheral blood smear, peroxidase-positive giant inclusions in polymorphonuclear neutrophils, and to a lesser extent in lymphocytes, are diagnostic of Chediak-Higashi syndrome (CHS). Light microscopy of hair shafts shows irregular distribution of large and small pigment clumps. Sequence analysis of the LYST gene identifies mutations in approximately 70% of affected individuals.

Mutations of the CHS1/LYST gene, located on chromosome 1q42, are the cause of CHS.

The function of the CHS1/LYST gene product is not yet completely understood. The CHS1 protein is predicted to be a cytosolic protein with a role in vesicular transport. Indeed, CHS is characterized by massive cytoplasmic lysosomal and nonlysosomal inclusions in granule-containing cells. Melanocytes containing giant melanosomes that do not get distributed to keratinocytes seem to be the cause of hypopigmentation.

Patients who survive infections usually develop life-threatening, accelerated phases of hemophagocytic lymphohistiocytosis, typically triggered by Epstein-Barr virus infection, within the first or second decade. The accelerated phase is characterized by macrophage and T-cell activation with lymphohistiocytic infiltration of liver, spleen, lymph nodes, central nervous system and bone marrow. This is the most common cause of death in CHS patients.

Transient remissions are reported after treatment with etoposide, corticosteroids and supportive care; relapses are frequent and are increasingly resistant to treatment. Treatment for CHS is hematopoietic stem cell transplantation (HSCT). Patients who have survived into their third decade after HSCT develop neurologic involvement with weakness, ataxia, sensory deficit and progressive neurodegeneration. It is not expected that HSCT would prevent neurologic deficit.

Antibiotics are effective in controlling recurrent infections but do not prevent the other complications of CHS including bleeding, hemophagocytic syndrome or neurologic involvement. The bleeding diathesis usually does not require treatment.

All patients must be referred to an hematologist for adequate treatment and follow-up. 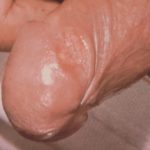