Dabigatran was found to have comparable efficacy and safety as standard of care (SOC) heparin or vitamin K antagonists for treatment of acute venous thromboembolism (VTE) in children, even in those younger than 2 years of age, according to study findings presented by Manuela Albisetti, MD, of the Children’s Hospital of Eastern Ontario, Canada, and the University of Iowa Hospitals and Clinics, Iowa City, Iowa, at the virtual 62nd American Society of Hematology (ASH) Annual Meeting and Exposition. Additionally, algorithm-based age- and weight-adjusted dosing of oral dabigatran for the treatment of VTE was found to be appropriate in children from birth to <18 years of age.

“These [SOC] anticoagulants have several limitations, such as the need for parenteral administration, dependency on antithrombin levels, and a need for frequent monitoring,” said Dr Albisetti. “Dabigatran etexilate can provide an effective treatment for VTE in adults and could be a valid alternative to standard of care for acute VTE in children.”

DIVERSITY (ClinicalTrials.gov Identifier: NCT01895777) was an open-label, randomized, active-controlled, multicenter, phase 2b/3 trial. Children with confirmed VTE, grouped according to age (birth to <2 years, 2 to <12 years, and 12 to <18 years) and who were initially treated with unfractionated or low-molecular-weight heparin (up to 3 weeks), were randomly assigned (2:1) to receive dabigatran (dosed using an age- and body weight-adjusted dosing algorithm) or SOC for up to 3 months. The primary efficacy endpoint was a composite of the proportion of children with complete thrombus resolution and freedom from recurrent VTE or VTE-related death. Safety endpoints were also assessed. Follow-up duration after treatment was 4 weeks.

The dabigatran geometric mean trough exposures demonstrated sufficient exposure for all age groups and were within values noted in adult patients with VTE from the RE-COVER trial (ClinicalTrials.gov Identifier: NCT00291330). Pharmacokinetic/pharmacodynamic relationships were also similar across age groups in children receiving dabigatran and were comparable to values noted in adults with VTE treated with dabigatran.

“These data demonstrate that dabigatran can be considered a valid alternative to standard of care for the treatment of acute VTE in children,” concluded Dr Albisetti.

These data were published online in Lancet Hematology after the presentation. 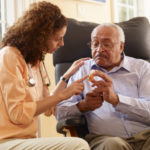