Patients younger than 10 years with Diamond-Blackfan anemia (DBA) who undergo stem cell transplantation from sibling or unrelated donors may have low rates of graft-versus-host disease (GVHD), supporting use of the procedure among transfusion-dependent patients, according to research presented at the 61st American Society of Hematology (ASH) Annual Meeting in Orlando, Florida.

DBA is a heritable condition associated with congenital abnormalities and heightened risk for cancer. Steroids are a common treatment for the condition, though many patients remain dependent on transfusion. Stem cell transplantation is a recognized curative option for DBA, but there are limited data supporting its use.

At 36 months, event-free and overall survival were 81% and 84%, respectively. Patients younger than 10 years had a higher overall survival rate compared with the rest of the cohort (91% vs 71%; P = .01). There was no significant difference in survival, and although GVHD rates were higher in patients who received transplant from unrelated donors compared with patients with sibling donors (22% vs 11%), this difference was not statistically significant. All noted deaths were due to transplant-related causes.

“To the best of our knowledge, this is the largest reported cohort of patients transplanted for DBA and having a long follow-up,” the authors wrote. “The very good overall survival of patients undergoing transplant from both sibling and unrelated donors and the rather low rate of chronic GVHD confirms that this procedure can be considered an alternative option for transfusion-dependent patients below 10 years of age.” 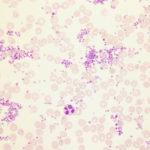