Researchers have created a personalized prediction model that can predict the probability of survival in patients with myelodysplastic syndromes (MDS) who undergo allogeneic hematopoietic cell transplant (HCT), according to an oral presentation at the 60th American Society of Hematology (ASH) Annual Meeting in San Diego, California.1

HCT is the only potentially curative treatment for MDS, but genetic mutations can influence clinical outcomes. Identifying a patient’s likelihood of benefiting from HCT is important because of the possibility of transplant-related relapse or mortality.

Researchers collected peripheral blood samples from 1514 patients with MDS enrolled in the Center for International Blood and Marrow Transplant Research (CIBMTR) Registry, and a 127-gene mutation panel was performed on the samples. Patients were randomly assigned to either training (1059 patients) or validation (455 patients) cohorts.

End points of the study included overall survival and relapse; both were measured from time of transplant to death or relapse, respectively, or last follow-up. The researchers used a random survival forest algorithm to build the prediction model and used concordance index to test the accuracy of the model. To calculate survival and relapse probability, clinical and molecular variables were randomly selected.

Overall, 862 donors were 8/8 HLA-matched unrelated donors, 296 were less than 8/8 HLA-matched unrelated donors, 181 were HLA-identical siblings, and 174 were umbilical cord blood donors. Patients underwent myeloablative (789 patients), reduced intensity (582 patients), or nonmyeloablative conditioning (130 patients) or had missing data (13 patients). There was a median of 2 mutations per sample.

The researchers created a web application that will compute a patient’s probability of survival at 6, 12, and 24 months after HCT upon clinical and mutation variables being entered. They suggested that this tool “may aid physicians and patients in their decision prior to HCT.” 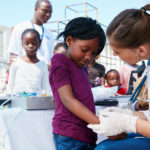